I'm starting work on a new 2FS layout project. After much deliberation, I've chosen a fictitious station on the projected but never constructed Highland Railway line from Garve to Ullapool. Corrieshalloch station is (in my imagination) squeezed between the main Garve to Ullapool road (now the A 835) and the Droma River, at the location now known as "Braemore Junction" where it is joined by the A 832. This is just south of the scenic Corrieshalloch Gorge, from which the station takes its name. The long access road to Braemore Lodge also leaves the main road near this location, and I am supposing that the station was located at this meeting of routes. Incidentally, the local Braemore estate was purchased in 1857 by none other than John Fowler. At the time he was civil engineer for the ground-breaking Metropolitan Railway in London; he went on to become chief engineer for the Forth Rail Bridge. The model will be set in about 1910 (once I have built sufficient locos and stock...)

Lying roughly mid-way between Garve and Ullapool, I have assumed that the Highland constructed a passing loop here. As you will see from the plan below, the model depicts only half of the station. This enables the full scenic area to fit in a length of 1060mm (3'6"), dictated by the dimensions of our car (not a big one!). In part, this is the reason for modelling a fictitious location. I just couldn't fit in a real Highland station, at least, not an interesting one. Hopefully the plan retains something of the spatious feel of the real locations.

I've chosen a through station rather than a terminus as I think it is better representative of the long cross-country lines that defined the character of the Highland. Fiddle yard boards will be added on either end, with the current idea being train turntables. For buildings, I envisage a typical HR goods shed and signal box, a row of railway-workers cottages, and a station building based on the design at Garve or Strathcarron. I want to exploit the vertical dimension too, so the land rises from the river at the front of the layout to hills at the back.

The following sketch is based around a Templot track plan. I hope to produce an improved version of the latter before tracklaying, including such things as interlaced timbering and catch points. 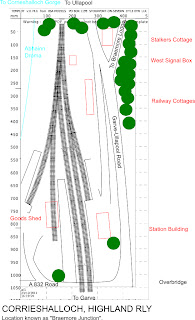 Posted by Anthony Yeates at 17:20 No comments: