The cabin is based on drawings of one of the two cabins at Garve, albeit in mirror image. Here are a couple of photos of the present state of construction: 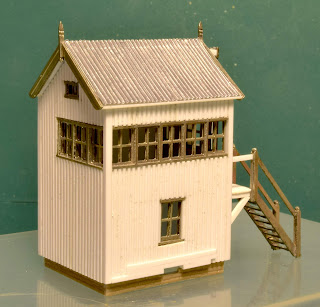 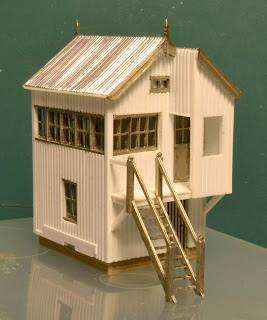 In building the model, I was strongly influenced by Jim Watt's recent build of a Caledonian Railway cabin, the construction of which he described in the October 2mm Magazine. I followed Jim's cunning strategy of making an etched jig for soldering up the steps (albeit on a smaller scale!), and I drew these up on an etch along with the windows, doors and barge-boards with their finials. I decided it would be quicker to model the rest in plasticard than to spend time drawing it on the computer.

The windows are more complicated than they look, with up to 6 layers of 10-thou etch in places, to accommodate the panes of "glass" which will be slotted in after painting. To allow this, the windows are all still removable, and indeed some of them are not present in the photo. There's also a rather vulnerable handrail still to be added - I will probably do this after painting along with the downpipes. To facilitate removing the windows, the whole construction is in three pieces, as you see in the next photo:

Putting this lot together out of Evergreen styrene sheet has kept me busy for a while, but it is very nearly at the painting stage now. The roof was made last night from home-corrugated aluminium, in my usual way. It still needs finishing along the ridge.
Posted by Anthony Yeates at 14:49 2 comments: