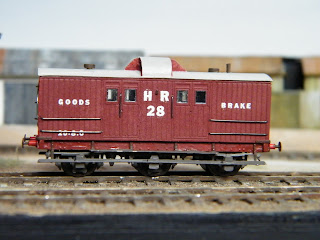 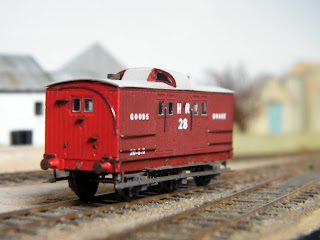 After a rather long delay, the brake van is now complete except for couplings. I also want to tone down the paintwork a little next time I have the airbrush out.
I used Phoenix Precision Paints "Caledonian freight wagon oxide" for the sides, and a brighter red for the ends. The roof should be white but I went for a pale grey to try and tone it down a little. I wasn't sure whether the sides of the roof lookout should be oxide or white, although one (black and white) photo from LMS days looked more like oxide, so I went for that.
Transfers were individual letters from Fox sheet FG1003 in the "Franklin heavy" typeface. The handrails were added from 0.3mm steel wire fitting into the holes which I had previously opened out. Finally, glazing panels were cut from clear styrene sheet, and fixed in place with Microscale Kristal Klear. After failed efforts to cut pieces to fit the strangely-shaped windows in the roof lookout, I gave up and simply filled these with Kristal Klear itself.
Posted by Anthony Yeates at 05:45 No comments:

As my first step in modelling the Highland Railway pre-grouping, I thought I would start with an iconic Highland 6-wheel goods brake van, from the Lochgorm kit. The etch is reduced from 7mm and 4mm scales, but has proved a practical proposition. (For an example build in 7mm, see petesworkshop). 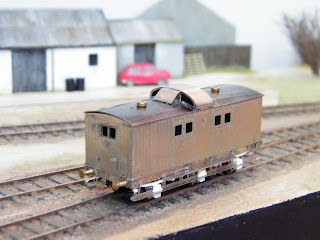 Construction is nearly complete: I still need to fit the chimney, handrails and couplings. Some filling is needed around the "birdcage" lookout. Most of the brake rigging is missing, but I don't think it would be visible. There should be tie rods between the bottoms of the W-irons, but I don't see how to fit these without inhibiting movement of the W-irons. 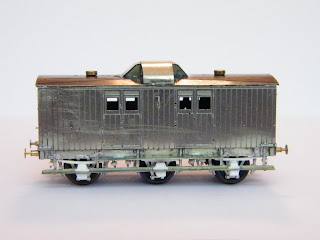 Axleboxes and springs are not included in the kit. I built them up in plasticard and fixed them around the footboards. They are much reduced in depth to allow for movement of the W-iron assemblies. The J-hangers are included in the kit but I soon gave up trying to put them together in this scale! Instead I made some crude replacements from plasticard and lengths of wire (still quite fiddly). They don't stand up to close scrutiny but at least there is something there! 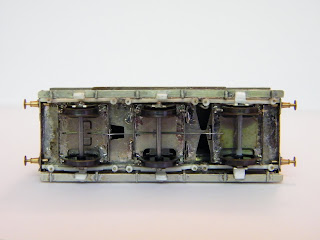 The third photo shows the underside of the van. I build the chassis basically as described in the kit instructions. Each axle is fitted in its own W-iron assembly. The rightmost of these is rigidly soldered to the van floor. The leftmost is held by fold-down tabs that allow the axle to pivot in the centre. The centre assembly is allowed both to pivot and to move side-to-side (I had to file some material off the inside of the solebars and the backs of the top-hat bearings to allow this). It is held by a 0.010" steel spring wire which is soldered to fold-down tabs at either end. It runs up and down my Inverneuk layout ok, but time will tell if this system works satisfactorily out "in the wild". Wheels are 2mm Association coach wheels.
Posted by Anthony Yeates at 06:19 1 comment:

I have been working on and off for several months on a Barclay Class 06 shunter, based around an etch from Judith Edge (shot down from 4mm).
First stage was to build up the main bodyshell using the parts provided: 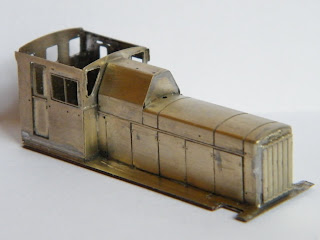 This prototype has a rather narrow bonnet (something like 7mm inside width) that won't fit most types of motor, so it presents something of a challenge to design a workable mechanism. Particularly as it is my first scratchbuilt chassis!
The next photo shows the body attached to the basic structure of the chassis. The frames are made from thin PCB, and spacers are solid brass (as per Nigel Cliffe's DY1 article). The Judith Edge etch does include frames but I wanted to use the PCB method with solid brass spacers to maximise weight.
The third photo shows the spacers more clearly. They are tapped for the 12BA screws that hold the frames on - the screw heads will be hidden behind steps eventually. They are drilled to a clearance fit for two further screws which attach to captive nuts on the top of the footplate (inside the cab and front bonnet), thus holding the body and chassis together. The third axle bearing in each frame will support the jackshaft. 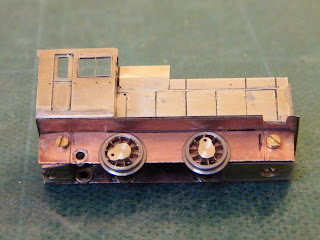 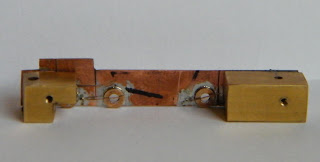 I decided to try one of Nigel Lawton's "micro-motors" as these are narrow enough to fit in the bonnet, thus keeping the cab empty. I spent quite a considerable time pondering how to fit in a mechanism and also experimenting with how to mount the motor etc. I settled on the arrangement you see below, with a 3-stage reduction. The initial stage is via one of Nigel Lawton's rubber band drives, followed by a conventional Association 21:1 worm, and finally 14:20 spur gears. The latter are the new metric M0.3 gears, as these had the most suitable diameters. Due to the narrow width I was severely limited in the choice of gears to fit on the wormwheel cross-shaft. There was also a limitation due to the rather small 7mm driving wheels. The overall reduction works out at something like 108:1. 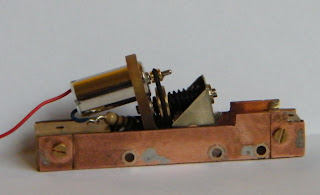 The intermediate gear shafts are held in a simple "gearbox" folded up from a scrap part of the kit etch. The "motor mount" is simply a piece of PCB hollowed out to an interference fit. It is bolted on to the gearbox so that the whole can be dismantled and the motor and/or rubber band drive can be replaced. Notice also the resistor between the motor and frame, recommended because these motors are rated only for 6V. 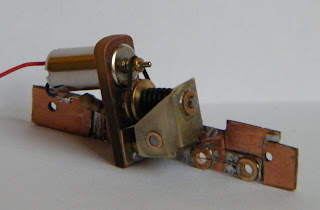 Amazingly, the mechanism now fits inside the body. However, it is rather temperamental, and I'm in the process of "tweaking" the setup to get the motor to turn happily in both directions. I got it to work initially but rather infuriatingly ruined the alignment somehow while modifying it to fit in the body! The problem is that the gearbox needs bending slightly to achieve minimum resistance on the worm and the correct meshing distance for the gears. In theory this will allow me to correct for my inaccuracy in marking, drilling and folding it up. In practice it is remarkably difficult to get right. Hopefully I will be able to get it turning OK, fit the wheels, and be able to move along the track! I'm not particularly confident in its running abilities, but it is after all my first chassis.
Posted by Anthony Yeates at 15:23 4 comments: