I've recently been working on motorising the turnouts. Here is a short video of the first one in action:

Below is a side view of the trackbed. The turnout is operated by a servo motor mounted by screws onto a simple wooden frame. If you look carefully, you can see the operating linkage made from brass wire. I coiled it to give it extra spring length to protect against any inadvertent over-throw by the servo. The multicoloured wires from the servo simply plug directly into the ESU SwitchPilot Servo unit, which attaches to the main DCC bus and will control all four turnouts. Since the layout is small, I'm just powering this from the main track supply. 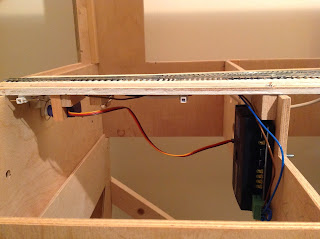 The last view is taken from underneath (with the baseboard upside down!). You can see the functional plastruct tie-bar, as well as the microswitch installed to change the crossing polarity. This is operated by a 12BA bolt through the tie-bar. The SwitchPilot Servo unit has some "programming" buttons which make it easy to set the start and end positions of the servo movement, as well as the movement speed. The turnout is changed via the "accy" button on my DCC handset. If I get fed up of the couple of key presses that are required, the SwitchPilot unit has a band of extra terminals allowing push-switches to be wired in for each turnout. 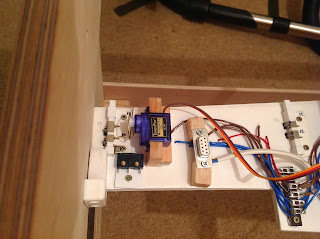