Lessons from an exhibition

Corrieshalloch made its exhibition debut last weekend at RailexNE in North Shields, albeit as a "work in progress" rather than a finished layout. Overall. I was relieved that it worked pretty well, with the soldering iron having to come out on only two occasions for repairs. A succession of three trains (all of my available locos) supplemented by a class 37 running light engine (courtesy of Mick Simpson) dutifully paraded back and forth. The comments of "oh, look at this one: it's a snowscene" were frequently heard, sometimes intended as a joke but not always. Alisdair Campbell (whose prize-winning Strath made a static cameo appearance) had the inspired idea that we block the line with a snowdrift and suspend operations for an extended lunch break. 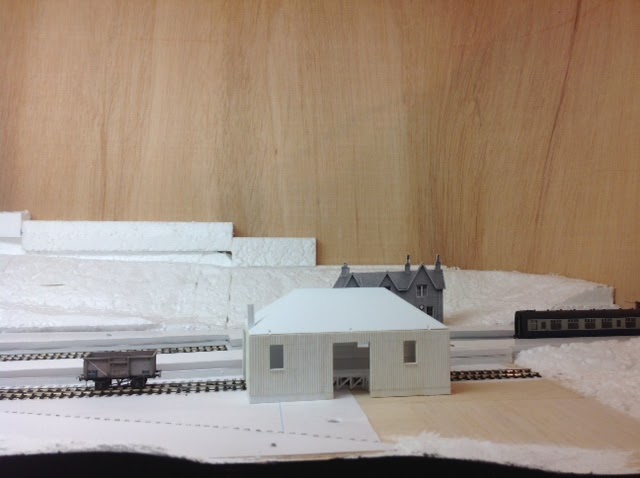 One lesson learnt was in the setting up and taking down. It took me a whole hour from close of play to driving away, which seems like a long time given the size of the layout. Although I was working alone, I decided that a lot of time was spent fiddling with nuts, bolts and washers for assembling the legs. As a result, I have now glued washers and nuts to the inside of the legs, and modified the bolts to have a handy wing nut on the outside (photo below). This, coupled with a bit of widening of the holes, should mean that assembly is much quicker and easier in future. 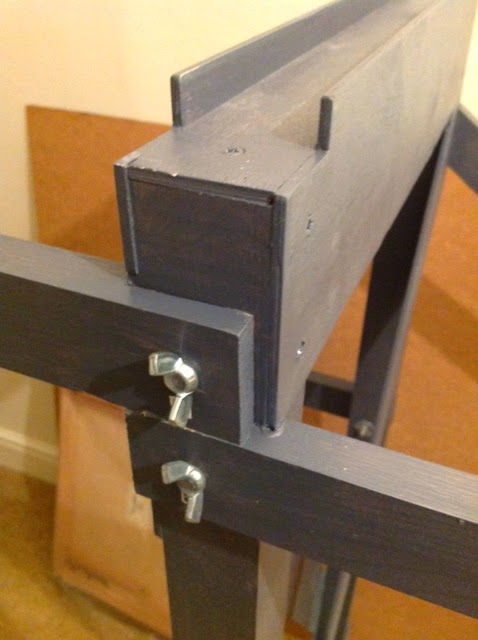 The other major lesson relates to the appearances of the soldering iron alluded to above. Both repairs were to the homemade bolts that connect the fiddle yard turntables. These were originally just soldered to a couple of pcb sleepers glued to the baseboard, but this was far too flimsy to withstand constant use. As pointed out by Mick (after one came off in his hand), heavier engineering is required! So version 2 will see the rails attached to heftier pieces of pcb that are screwed right through the balsa trackbed and into the plywood beneath. Hopefully this will be better. The photo below shows the version 1, as it was at RailexNE. 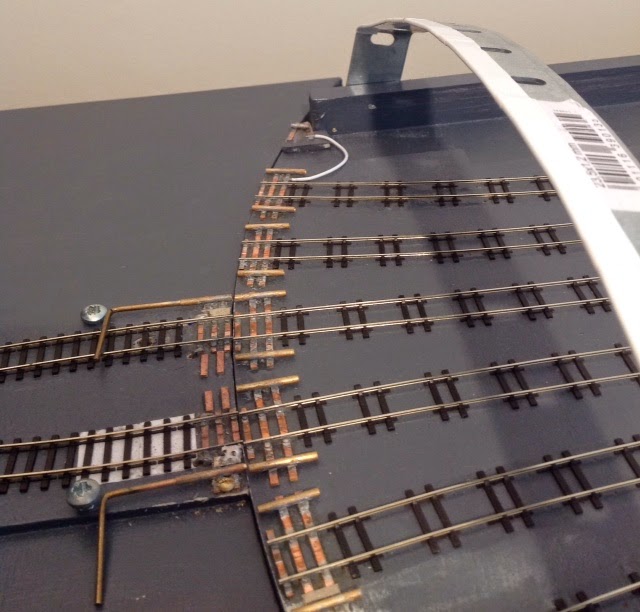 The turnouts at the entry to the goods yard are also a little bumpy, causing some wagons to couple up again against the operator's will. So another task is to iron out these minor issues with the track.

The good news is that the layout will appear again at Shipley on 20th-21st September, along with the 2mm roadshow, so feel free to pop along and say hello. With any luck, some of the issues above will have been ironed out, and another loco will be in service to boot.
Posted by Anthony Yeates at 16:27

Nice to see the layout at Shipley yesterday and well done for stepping into the breach at the last minute.

Sorry I couldn't chat to you and Mick for longer but I was on a pretty tight timetable yesterday.