The goods shed was actually the first structure that I started, a few years back now. I recently decided to progress it further, which basically meant adding the roof, doors and windows. It is entirely modelled in styrene, except for the paper strip roof tiles (printed by computer), the brick paper covering the chimney (from the http://scalescenes.com free demo kit), and the chimney pot (a white metal casting of unknown provenance). 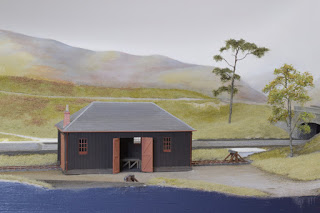 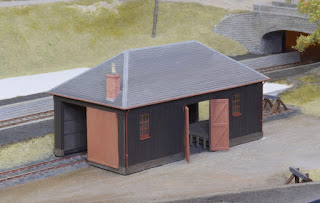 You can see that I've made a start on painting, although there is definitely more weathering to do. I'm going to leave this for the moment and try to blend it into the whole scene at a later stage. Missing also at present are the interior crane and the enamel advertising signs which seemed to grace most of these sheds in photographs of the period. According to Highland Railway Liveries, the shed walls were creosoted, while the doors and windows were painted burnt sienna. I've not found much guidance on how dark or light a shade of burnt sienna was used. so I opted for a reasonably light one as seems to be suggested by the black-and-white photos. Perhaps someone will correct me.

Another couple of problems to be fixed are (1) the gap around the bottom of the building, and (2) the lack of lighting on its front face. I cheated for these photos and used an extra lamp pointed at the layout, but in the long run I think I will need to add another strip of LEDs right at the bottom of the layout fascia.

Also in the top photo are some trees - I made a start on these a while back and need to make many more. They use traditional twisted copper wire, covered in solder. The foliage is represented by various products held on teased out Woodland Scenics poly fibre.

Evident also are the spaces where the station building and waiting shelter will go - these are on my to-do list!
Posted by Anthony Yeates at 17:09