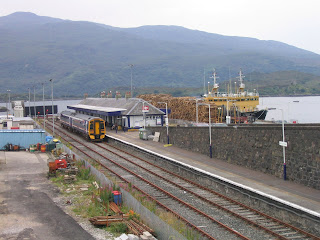 Although it's a small test layout, my aim is to give Inverneuk a definite sense of time and place. The time is 1970s BR and the place is the Highlands, somewhere north of Inverness. As I wasn't around in the 1970s, I've put up a photo I took in July this year at Kyle of Lochalsh (at least the place is right). With the exception of the 158 Sprinter (and the Skye Bridge which is not in this view), it probably hasn't changed much. There's a nice dismal feel, but actually the rest of the day was sunny up there, unlike St Andrews which was in a thick haar when I left at 6am, and still hadn't cleared by my return at 11pm!

The Highland setting of the layout should be recognisable, particularly once I build some appropriate locos (don't hold your breath). I will describe the characteristic buildings and the cliff face in future posts. The feeling I am after is a run-down old-fashioned railway in a remote corner of the country. The pictures of Dingwall in this album give the right feeling. In fact, I found lots of useful photos on similar sites to supplement the few I've managed to take.
Posted by Anthony Yeates at 20:55

1970s, Anthony - don't despair as Dapol will come rushing (well, about late 2009) to your aid with a Class 26. This could also mean that I won't have to scratch-build another Cropmton chassis !