Here are some early views of the underside of the layout to illustrate the (simple) baseboard construction and (slightly odd) method of turnout operation. 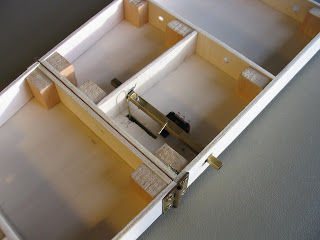 The boards are constructed from thin ply (I got a relatively small sheet from the 4D modelshop in London, no connection). It is soft and was easily cut with a Stanley knife into pieces for the top surfaces and strips for bracing underneath. There is also a cut-out section with lowered top surface to create an embankment at the cliff end of the layout (not seen here). Construction was simply by glueing, using chunks of softwood batten for support. 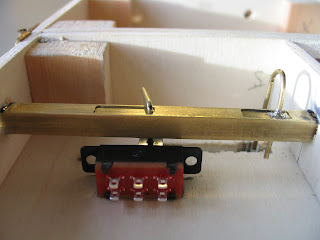 The turnout mechanism was problematic. Manual operation was the obvious choice, but there was insufficient room in the box to have polarity switches extending in front of the baseboard. So instead of operating a connecting rod by moving a switch, I opted for the reverse - namely moving the rod to operate both the switch and the turnout. I experimented with microswitches but found the spring in the switch contact to be too strong, so used miniature slide switches instead. (I have since been informed by Mark Fielder that the spring in the microswitches can be reduced by mounting them at right-angles, but I haven't tried it.) The switch is simply glued to the underside of the board.

I had some square section brass tubes so these were used to form a sliding rod. A wire connects this with the switch, and another with the tie-bar. Actually the tie-bar connection is a tube, and the wire connecting the tie-bar sits inside this. This was to allow the turnouts to be inserted at a later stage.

One point to note (no pun intended): the switch throw is longer than that of the tie-bar. I initially incorporated an Omega-loop in the tube connection to the tie-bar, but this made the operation too weak, so instead I have just extended the length of the tube to give enough play. It evidnently isn't quite flexible enough though, as the solder joint where it enters the square tube didn't hold. A subsequent botch using araldite seems to have done the trick for now.
Posted by Anthony Yeates at 21:21

This has generated a bit of interest. I said it would since there other just like me who like to see minimum space layouts.

Send me the material you're using here on a CD if possible and I'll put in to a small article on the layout for publication in the Magazine.