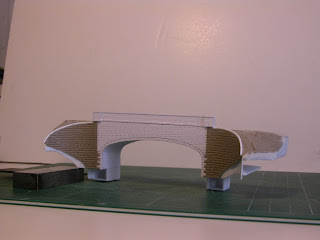 This is the road overbridge for Corrieshalloch. Over recent days, I've been adding the stonework to the previously built styrene shell. It's a mixture of Slater's embossed sheet (intended for 4mm?) and plain white card. Into the latter, I embossed a simple pattern of mortar lines using the blunt end of an old screwdriver. This mixture of materials stemmed from the prototype photo I was copying, which appeared to use a mixture of dressed and rather less dressed stone. I'm hoping that the whole will look ok once painted.

The curved wing walls and elliptical arch were a bit of a pain, but the use of a CAD template was invaluable for the arch.
Posted by Anthony Yeates at 17:52