Since another year is upon us, I decided to take some new photos of the layout. Comparing with those in the blog from a year ago, I realize that I have made some progress after all, although perhaps not as much as I would have liked.

First off, here are three photos of the layout itself. Little work has been done on the buildings since the Nottingham exhibition in March - only construction of the small waiting shelter on the down platform. However, the overall scenery has progressed rather more. Track is now ballasted and painted. I've made a start on the basic ground cover, although there is much to do. I had a go at painting the backscene (in acrylics) and I'm reasonably happy with it, although it will probably need some modification once the final colouring of the actual scenery is set. The lighting has also advanced since the Nottingham show, although it is not obvious here - in fact, an LED strip from https://www.led-lighthouse.co.uk/ has now replaced the IKEA fluorescent strip. 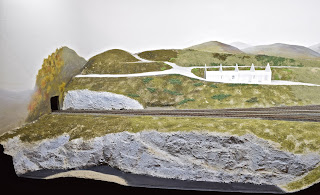 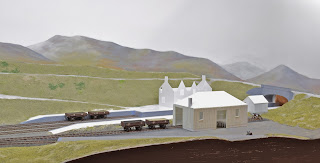 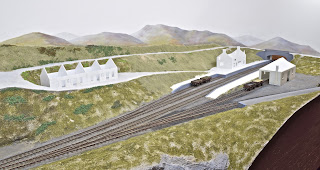 The next two photos show four Highland wagons that I finished off during 2015. I was surprised but happy that they won the John Barker trophy at the 2mm AGM in October. The top two are diagram 6 opens while the bottom two are diagram 23 drop-side ballast wagons. All of the bodies were scratchbuilt in styrene (and I have an accompanying box of failed attempts!) The chassis were cobbled together from 2mm Association parts and don't bear close inspection. For future wagons, I am experimenting with etching more accurate chassis, so watch this space.

I'd be very happy with that backscene and if it wasn't saying it before, the whole layout is now shouting Scotland!

Thanks, and a happy hogmanay to you too! The sky is actually plain white; the grey clouds are just shadows picked up by the camera.

Hi, very atmospheric now and a timely post. I'm just looking at LED lighting for my embryonic 2mmFS layout so thanks for the link. It's a similar size to yours so I'd be interested in what you went for with respect to the lights. First colour - or shade of white! - the obvious choice seems to be "natural" is that what you used? Second is the power output 5W, 10W or 14W? Which have you gone for.
Many thanks
Adrian

I went for 2835 LEDs (60 per metre) in "pure white" (5000K). According to the specs these use 14W per metre. Details are here. I was intrigued by the ones with colour changing controls, but decided against the expense.

Thanks for the info - it gives me something to work with.

Imagine all the people living life in peace. You may say I'm a dreamer, but I'm not the only one. I hope someday you'll join us, and the world will be as one. See the link below for more info.