Rather belatedly, here are a selection of photos I took during the layout's appearance at the 2mm Perth supermeet in April. The first two shots show my own stock. 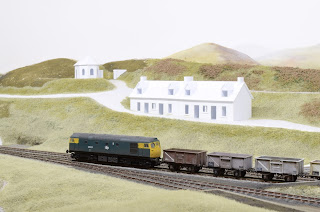 All buildings except for the signal cabin are now plasticard shells, although the station building is missing its roof. I'm trying to progress the layout as a whole, rather than completely finishing one building before starting the next.

The next three shots were staged with some of Alisdair Campbell's fantastic Highland locos and stock (along with my four wagons mixed in...). This is what I am ultimately aiming for, although it will be some time before I manage to build up my own fleet. 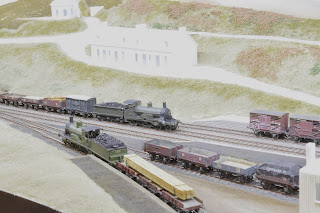 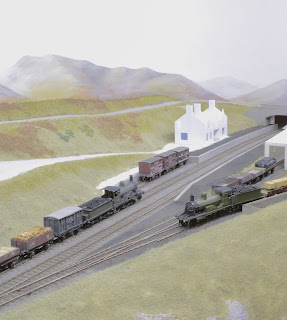 Boy, those Scots guys build slowly. Those half built houses from before the Great War still were unfinished more than 50 years later :-)

They do capture the character of Highland houses I remember from my year living in Aberdeen though.

Actually, to me the houses seem rather large, although they are built to measured drawings (of some examples at Blair Atholl, I think).

For what it is worth, I think the row of cottages were from Durnish. I remember fishing the burn still in my shorts - caught nothing other than weeds and went off fishing!