I've made some progress with the estate gatehouse on Corrieshalloch. This was designed to add a bit of interest to the background where it stretches up above the railway. Rather than model it on one of the real Braemore Estate buildings, I wanted something that was quite small but a little bit distinctive. The model I've made is inspired by the gate lodge at Ardkinglas in Argyll (https://canmore.org.uk/collection/1298177).

This building has a distinctive octagonal footprint which challenged my abilities, particularly on the roof. These photos show the model which is basically a plasticard shell with some reinforcing bits. The walls are covered with cartridge paper to mimic the rendered texture, and the roof uses overlapping strips of slates printed and cut from standard copier paper. I embossed the vertical joints between the tiles first, although I'm not sure they show through much after painting. The small sections of dressed stone (chimney stack and gateposts) are also cartridge paper, with the mortar lines embossed. The chimney pots are some whitemetal castings from my scrap drawer. 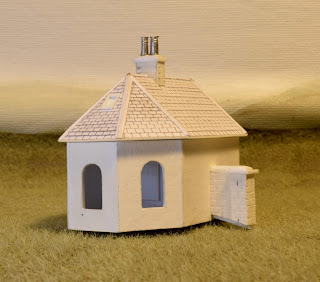 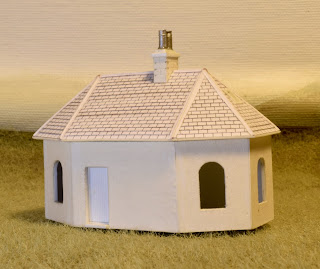 The next photo shows the windows, which were the trickiest bit (with a few failed attempts). The glazing bars are just painted on clear plasticard, but to try and get them neat I first scored parallel lines for the straight ones with a knife. I had to wing it for the curved bits. After painting, a cocktail stick was used to scrape off any stray paint up to the hard scribed line. I glued pieces of microstrip around the outside to give a raised frame (made over-thick then sanded down afterwards). The bit of wall here is the second gatepost, on the opposite side to the building.

Here are some pictures of the gatehouse in position on the layout, after some initial coats of paint.  More work will be needed to weather and blend it in with the surrounding scene, but I'm quite happy so far. 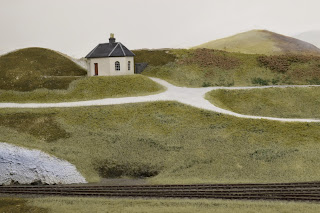 You can just about see the gate itself below: this is from a Scale-Link etch and soldered to brass posts which sit in holes in the road. It is yet to be painted. 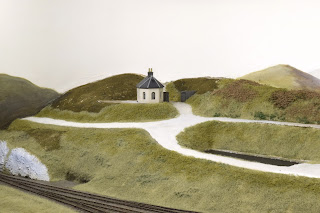